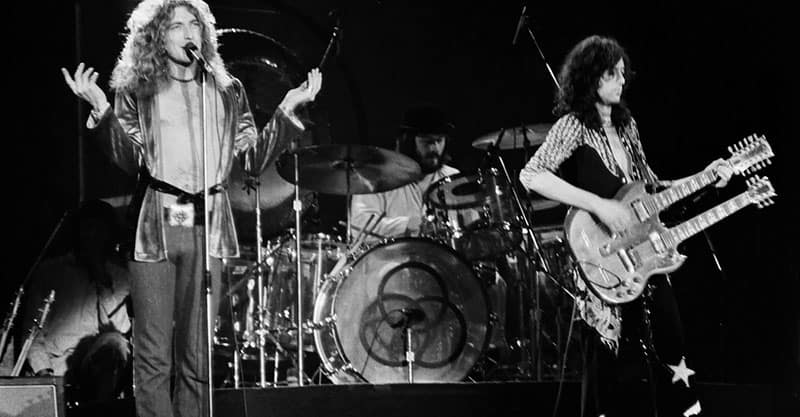 It’s even considered one of the best classic rock songs of all time, which is no ordinary feat considering the competition – Aerosmith’s “Sweet Emotion”, Jimi Hendrix Experience’s interpretation of Bob Dylan’s “All Along The Watchtower”, Queen’s “Bohemian Rhapsody”, Derek And The Domino’s “Layla”, Pink Floyd’s “Comfortably Numb” and more.

So, why is it that if you play “Stairway” in a guitar store, you’re met with teeth gritting, cringes and eyerolls, if not a stern “No Stairway!” from the staff?

Let’s look at why “Stairway To Heaven” is banned in guitar stores.

“No Stairway! Denied!” – A Bit Of History

One of the first pop culture references to “No Stairway” comes from the 1992 sleeper hit Wayne’s World, starring comedians Mike Myers and Dana Carvey.

Interesting to note that the riff Myers plays in the movie doesn’t bear much resemblance to “Stairway” except for the phrasing, because they didn’t want to have to get the rights to the song.

“No Stairway! Denied!” was basically one of many throwaway jokes in the film, but the sentiment resonated because, for many unfortunate guitar store staff members, it hit a little too close to home.

If you worked at a guitar store in the 70s or 80s, you probably couldn’t go a single day without a customer coming in and playing some rendition of “Stairway To Heaven” on a guitar.

I say “some rendition” because honestly there were probably plenty of newbies that came into the store and could barely even pull it off. Of course, that’s part of what would start to drive you nuts as a guitar store employee.

So, in summary, it’s kind of like if someone showed up to a Halloween party wearing a Superman costume when you asked them to be original (only more annoying).

Plus, plainly, it would be hard to choose a more obvious classic rock riff.

Conversely, if you showed up and rocked out some Pat Travers, onlookers would probably be impressed with your taste and skill.

Is “Stairway To Heaven” Actually Banned At Guitar Stores? 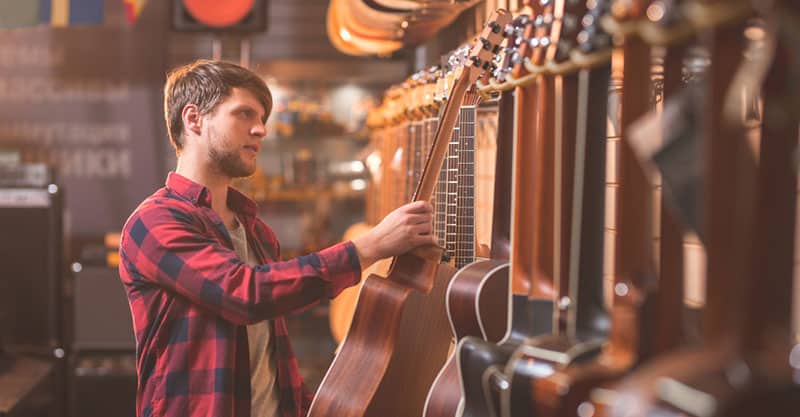 You can play just about any other popular riff and get away with it at a guitar store (not saying you should), so why not “Stairway”?

Basically, choosing not to play “Stairway” at a guitar store is more of an etiquette thing than anything.

And, while there’s usually a bit of a “silent ban” at any guitar store, you probably won’t see any signs telling you not to play “Stairway To Heaven.”

Still, if you respected the staff and customers around you, you wouldn’t just pick up a guitar and play the opening riff to “Stairway” because you know they’ve had to hear everyone, and their dog play it. And, they’ve had to hear people play it poorly too.

Could you get away with it without getting any sideways glares? In most cases, probably.

And, as a guitar teacher, I can tell you I’ve played “Stairway” in a guitar store more times than I can even count. This wasn’t to bug anyone, but I did it because I was teaching my students how to play it.

Did some of my students then go onto bug some of the staff by playing “Stairway” in the store? That’s entirely possible. If I was there to witness it, you would have heard me cackling in the background.

Bottom line, there isn’t a hard ban on “Stairway” at guitar stores, but if you get chastised, yelled at or kicked out for playing it, don’t say I didn’t warn you.

Is It Because “Stairway” Is The First Song People Learn?

I was a professional guitar instructor of over 10 years, and I could count on one hand the number of complete beginners I know who started out by learning “Stairway To Heaven.” Honestly, I can only think of one, and they weren’t even my student.

Maybe in the 70s and 80s it was among one of the first songs guitar teachers taught their students, though honestly, I can’t imagine why.

Without a good handle on barre chords and fingerpicking, you could struggle trying to pick up this song big time.

Plus, there are plenty of easy classic rock songs beginners could more readily pick up – “Smoke On The Water” by Deep Purple, “Have You Ever Seen The Rain” by Creedence Clearwater Revival, “The Joker” by Steve Miller Band and so on.

I can hear guitar store staff complaining already – “don’t give people any ideas.” I honestly wouldn’t be surprised if there was a bit of a silent ban on “Smoke On The Water” in most guitar stores too, for many of the same reasons.

Anyway, the only other way this could have happened is if there was a proliferation of guitar tab books teaching people how to play ”Stairway”, which I can’t completely rule out.

And, many guitar teachers were probably asked to teach their students how to play it too.

Anyway, while this seems like a satisfactory explanation for the general public, there is no reason to teach a complete beginner “Stairway”. They would probably struggle with it, and both the student and teacher could get easily frustrated trying.

So, this is just a myth to satisfy general curiosity.

Is It Because “Stairway To Heaven” Is An Easy Song To Learn? 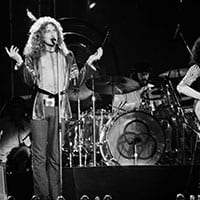 With all the fingerpicking, barre chords and lead parts going on, it would take an intermediate to advanced player to learn “Stairway” from top to bottom, and it could take a good long while too.

This isn’t to suggest some parts aren’t easier than others.

But even the intro requires a bit of skill to play.

Jimmy Page’s fingerpicking isn’t the cleanest or most impressive, especially live, but in the studio, he was always a wizard, pulling every riff off with absolute perfection.

Could you learn to play “Stairway” poorly (and, I do mean poorly) as a beginner? Sure. And, some people probably did.

But if you were just starting to learn to play the guitar, it would probably be your sixth or maybe even 12th song. Maybe your second or third song if you were advancing quickly. You’ve got to have all the intermediate techniques down to play this song well.

An entire generation of guitarists didn’t learn to play “Stairway” because it was easy. They did so because it was an instantly recognizable masterpiece and it turned them onto guitar.

So, no, no one learned “Stairway” because it was easy.

Is It Because “Stairway” Was (And Still Is) A Popular Song?

Yes. “Stairway To Heaven” was, and still is, an incredibly popular song. Its full eight minutes still gets played on the radio, unlike some songs that had to endure “radio edits” to even be considered for airplay.

For all the flak it has received (including “No Stairway” via Wayne’s World), it stands out as one of the most brilliant classic rock songs of all time. Some even say it’s the best song of all time period.

And, you would only need to say nine words total to explain why.

But if I were to add anything to that, “Stairway” is unique because:

The popularity of “Stairway” is undeniable. No doubt it’s the reason some even picked up the guitar, and for many, it was the inspiration behind learning the instrument.

Is It Because “Stairway” Is A Cool Song? 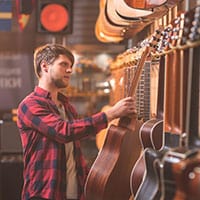 Yes. Even though we sometimes make fun of it, “Stairway To Heaven” still stands as a monumental achievement. It’s a cool song with a great chord progression, killer vocals and an unforgettable guitar solo.

We can’t forget Jones and Bonham’s contributions either, because they gave the song its color and texture without taking anything away from it – that takes artistic integrity!

The reason so many guitarists and would-be guitarists tried (either successfully or unsuccessfully) to pick up “Stairway” is because of its haunting beauty and intense climax.

It starts slow but it explodes into its trademark hard rock section.

If you were going to learn a song in the 70s, it was this one.

Sure, there were plenty of other cool things going on in classic rock, but the one that stood out above all was “Stairway” because it was cool.

Tips On What To Do Instead At A Guitar Store

Everywhere you go, you can hear guitarists copping their favorite players in guitar stores.

This is just my opinion, but I think it gets kind of old.

I mean, it’s okay to take inspiration from your favorite players. Maybe even sneak in a few popular riffs at the guitar store.

But the guitar is such an expressive instrument. Why not play a bit of your own material, or at the very least, put your own spin on popular songs?

If the pressure is on to play your own material at the guitar store, you might be prompted to practice harder before you even go. And, that’s a good thing.

If you don’t have any good riffs, you’ll be forced to come up with a few.

If you can’t play your best riffs yet or if you haven’t memorized them, again, you’ll be forced to spend some time in practice. It’s all good!

I would love to walk through a guitar store, hear a great riff and go, “what was that?” and get into conversations with other musicians.

If you’re going to sit around playing guitar at a guitar store, why wouldn’t you try out your own riffs on various guitars, effects and amps? That way, you’d have a better idea of whether the gear is suited to you and your projects.

Why Stairway To Heaven Is Banned At Guitar Stores – Final Thoughts

“Stairway To Heaven” may be banned in guitar stores, but it’s not against the law to play it.

Perhaps, out of courtesy and respect for the staff and other customers, you’ll refrain from excessive self-indulgence.

You don’t need to follow our advice – you can try out anything you want.

But now that you know the history behind “No Stairway”, perhaps you’ll give it the reverence it deserves.