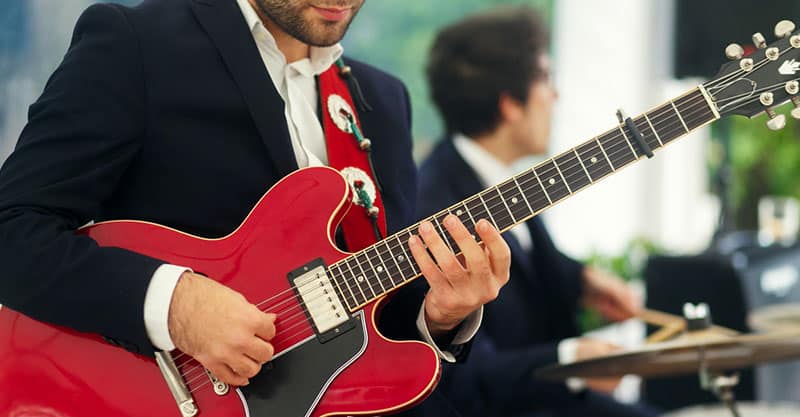 Let’s not beat around the bush – playing guitar with a wedding band has a certain stigma attached to it. Wedding bands in movies like The Wedding Singer or LaLa Land are seen as a lame alternative to “real musicians” who play their own music.

For a long time, that’s how I perceived wedding bands too. Then, after joining one to earn a few extra dollars, I realized how wrong I’d been. As the band got more established and we went from playing in bars to playing weddings and private events, it became clear to me that playing in a wedding band offered musicians a long list of benefits. Ironically, I ended up creating a covers band agency that now offers live bands for hire in four countries around the world!

I’ll outline why you might want to consider playing with a wedding band. It’s not to say you’ll achieve all of these things, and it takes talent and hard work to get to the top of any area of the music industry. But let’s have a look at what’s possible.

Let’s Talk About The Money

A wedding band’s earnings will vary depending on a number of factors (experience, ability, demand, genre, size of lineup) but ultimately, it’s hard to deny that playing weddings pays really well. You can expect to earn anywhere from $200 – $1000 a night, per person. It is entirely possible to make playing in a wedding band your full time job, or at least to double your income from your day job with a couple of weekend gigs.

Get (Really) Good At Guitar

How often do you get to play on stage for 3 hours in front of an audience of 200+ party people? For a busy wedding band, the answer can be anything from once a week to 5+ times a week. That’s a ton of time you can think of as “getting paid to rehearse”. All that rehearsal time adds up to achieving a new level of ability on your instrument.

People from all walks of life get married, and need a wedding band. While most of the time you’ll be playing for regular people, you’ll also sometimes find yourself entertaining the rich and famous – Olympic athletes, TV stars, titans of industry and even famous musicians. You’ll be surprised how often these people will come up and chat to you between sets, and you might even end up staying in touch with some of them.

Fun With Your Friends 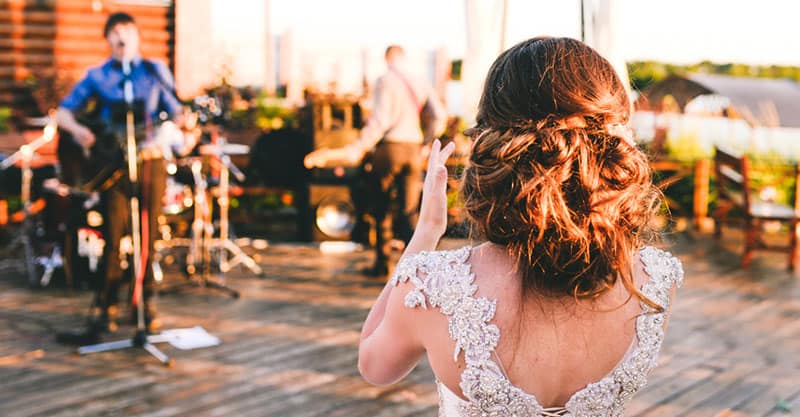 You probably started music in the first place to have fun. What could be more fun than playing great songs with your friends in front of a great audience? I’ve had some of the best nights of my life playing in my wedding band – the gigs themselves, and what happens after the gear is packed away. Playing in a wedding band creates tons of opportunities for insane nights out with friends, old and new.

As you play more and more gigs, you’ll realize you are making enough to buy whatever gear takes your fancy. I now have a board of boutique pedals, a handful of awesome guitars, and a vintage Fender amp I picked up in Nashville. Our PA includes in-ear monitors for every musician, and top of the line RCF speakers for great sound out front.

How does playing in your band each night and sipping mai tais by the pool all day sound? Being in a wedding band can lead to incredible opportunities, including spending weeks or even months performing on international cruises. The same agencies that book your band for weddings will often be in touch with cruise companies, and these companies need live entertainment. If you’re good enough, you could be earning money as well as enjoying an all expenses paid cruise. Best of all, when one cruise finishes, another begins, so you can hop from boat to boat for years if you wish. A word of warning – friends of mine who have done this loved it so much they found it hard to return to real life!

Before playing in a wedding band, I focused my attention on my genres of choice, which at the time were rock and metal. While my Metallica riffs were pretty good, I had practically no idea how to jam in any other genre.

Playing in a wedding band changed all that – I can now confidently slot in with a band playing a wide range of genres, from funk and soul to acoustic singer/songwriter tunes. You’ll get to know how to handle different styles and get a unique insight into how different artists write. And that leads to…

Playing dozens of classic songs will have a major impact on your own songwriting. You’ll learn how some songs create full dance floors, while others instantly clear the deck. Why is the Rolling Stones’ Satisfaction so enduring, whether you’re playing to 20 year olds or 60 year olds? There’s a certain magic in some of these songs, and you’ll slowly start to unpick just what it is as you play them night after night.

Ready to get started? Check out our list of Nashville’s top wedding bands to get inspired and get ideas for your wedding band.